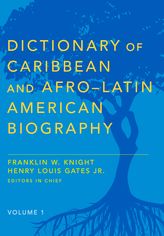 From Toussaint L’Ouverture to Pelé, the Dictionary of Caribbean and Afro-Latin American Biography will provide a comprehensive overview of the lives of Caribbeans and Afro-Latin Americans who are historically significant. The project will be unprecedented in scale, covering the entire Caribbean, and the Afro-descended populations throughout Latin America, including people who spoke and wrote Creole, Dutch, English, French, Portuguese, and Spanish. It will also encompass the full scope of history, with entries on figures from the first forced slave migrations in the sixteenth centuries, to entries on living persons such as the Haitian musician and politician Wyclef Jean and the Cuban author and poet Nancy Morejón. Individuals will be drawn from all walks of life including philosophers, politicians, activists, entertainers, scholars, poets, scientists, religious figures, kings, and everyday people whose lives have contributed to the history of the Caribbean and Latin America.


Franklin W. Knight is the Leonard and Helen R. Stulman Professor of History at Johns Hopkins University. Professor Knight was president of The Historical Society (2004–2006), and served as president of the Latin American Studies Association between October 1998 and May 2000. He also serves on advisory committees of the National Research Council, the Handbook of Latin American Studies of the Hispanic Division of the Library of Congress and the editorial boards of several academic journals. He has lectured across the Americas as well as in Australia, Japan, and Europe. In 2001 he was elected a Corresponding Member of the Academy of Letters of Bahia, Brazil and in 2006 a Corresponding member of the Academia Dominicana de la Historia. In 2007 the University of the West Indies, Mona Jamaica awarded Professor Knight an Honorary Doctor of Letters. He was elected Corresponding Member of the Cuban Academy of History in 2012; a Miembro de Honor by the Asociacion de Historiadores de America Latina y del Caribe (ADHILAC) in 2011; and the Asociación de Historia Ecómica del Caribe (AHEC) in 2013. He also won the Gold Musgrave Medal for Literature from the Council of the Institute of Jamaica in 2103.

Henry Louis Gates, Jr. is the author of several works of literary criticism, including Figures in Black: Words, Signs and the “Racial” Self (Oxford University Press, 1987); The Signifying Monkey: A Theory of Afro-American Literary Criticism (Oxford, 1988), the winner in 1989 of the American Book Award; and Loose Canons: Notes on the Culture Wars (Oxford, 1992). He has also authored Colored People: A Memoir (Knopf, 1994), which traces his childhood experiences in a small West Virginia town in the 1950s and 1960s; The Future of the Race (Knopf, 1996), co-authored with Cornel West; and Thirteen Ways of Looking at a Black Man (Random House, 1997). Professor Gates has edited several anthologies, including The Norton Anthology of African American Literature (W.W. Norton, 1996); and The Oxford-Schomburg Library of Nineteenth Century Black Women Writers (Oxford, 1991). Professor Gates is co-editor with K. Anthony Appiah of the encyclopedia Encarta Africana, published on CD-ROM by Microsoft (1999), and in book form in its second edition by Oxford under the title Africana: The Encyclopedia of the African and African American Experience (2005). He is the author of Wonders of the African World (1999), the book companion to the six-hour BBC/PBS television series of the same name. In addition, he is a co-editor of Transition magazine. He is also the editor with Evelyn Brooks Higginbotham of African American Lives (Oxford, 2004) and the forthcoming African American National Biography. He was host in early 2006 of “African American Lives,” a four-hour PBS documentary series tracing black history through genealogy and DNA science. An influential cultural critic, Professor Gates’s publications include a 1994 cover story for Time magazine on the new black Renaissance in art, as well as numerous articles for the New Yorker. Professor Gates earned his MA and PhD in English Literature from Clare College at the University of Cambridge. He received a BA summa cum laude from Yale University in 1973 in English Language and Literature. Before joining the faculty of Harvard in 1991, he taught at Yale, Cornell, and Duke Universities. His honors and grants include a MacArthur Foundation “genius grant” (1981), the George Polk Award for Social Commentary (1993), the Chicago Tribune Heartland Award (1994), the Golden Plate Achievement Award (1995), Time magazine’s “25 Most Influential Americans” list (1997), a National Humanities Medal (1998), and election to the American Academy of Arts and Letters (1999). His interests include black critical thought, cultural criticism, social theory, modern and postmodern philosophy and literature, and the future of American youth.

Places of Birth or Major Involvement