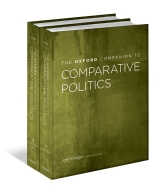 The Oxford Companion to Comparative Politics

The Oxford Companion to Comparative Politics fills a gap in scholarship on an increasingly important field within Political Science. Comparative Politics, the discipline devoted to the politics of other countries or peoples, has steadily gained prominence, allowing politics to be viewed from a wider foundation than a concentration on domestic affairs alone would permit. The Companion focuses on the major theories, concepts, and conclusions that define the field, analyzing the similarities and differences between political units. Entries cover such topics as failed states, grand strategies, soft power, capital punishment, gender and politics, and totalitarianism, as well as countries such as China and Afghanistan. There are also entries on comparativists who have influenced the field in significant ways, and politicians whose administrations have shaped the evaluation of contrasting governments. Additionally, 25 in-depth interpretive essays by notable figures analyze the discipline, its issues and accomplishments.

The Encyclopedia expands and updates the coverage of comparative politics found in The Oxford Companion to United States History, the award-winning 2001 publication edited by Paul Boyer (Emeritus, University of Wisconsin-Madison). More than 100 entirely new entries join nearly 200 revised and updated entries originally published in the Companion, all of which have been signed by topic experts. Heavy use of cross-referencing assists readers searching for related entries, and selective bibliographies direct readers to the most important recent scholarly works. There is also an introduction by Paul Boyer and a topical outline of entries.

Collectively, this work will promote a deeper understanding of a field that non-specialists often find elusive.


Joel Krieger is the Norma Wilentz Hess Professor of Political Science at Wellesley College and the Board Chair of Global Policy Forum (GPF). He has written extensively on politics, including the books Globalization and State Power: A Reader (Pearson Longman, 2006), Globalization and State Power: Who Wins When America Rules? (Pearson Longman, 2005) and British Politics in the Global Age (Polity Press and Oxford University Press, 1999). Krieger served as editor-in-chief of both editions of The Oxford Companion to Politics of the World.

American Federation of Labor and Congress of Industrial Organizations