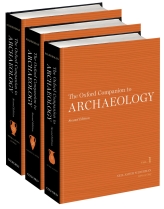 The Oxford Companion To Archaeology (2 ed.)

Since its publication in 1996, the Oxford Companion to Archaeology has firmly established itself as the standard reference work in the field of archaeology, remaining a favorite among students, scholars, and anyone interested in archaeology. In close to 800 entries, the second edition provides thorough coverage of historical archaeology, the development of archaeology as a field of study, and the ways the discipline works to explain the past. In addition to these theoretical entries, other entries describe the major excavations, discoveries, and innovations, from the discovery of the cave paintings at Lascaux to the deciphering of Egyptian hieroglyphics and the use of luminescence dating.

Much has changed in the field since 1996. Recent developments in methods and analytical techniques (e.g., laser-based mapping and survey systems, new applications of the scanning electron microscope) have revolutionized the ways excavations are performed. Cultural tourism, cultural resource management, heritage, and conservation have been redefined as areas within archaeology, and have been newly emphasized by scholars and administrators. Major site discoveries have expanded our understanding of prehistory and human developments through time.

The second edition explores each of these advances in the field, adding approximately 150 entries. In addition to significant expansion, first-edition entries have been thoroughly revised and updated to reflect the progress that has been made in the last decade and a half.


Neil Asher Silberman is the Director of Programs at the Center for Heritage and Society, University of Massachusetts-Amherst, and President of the ICOMOS International Scientific Committee on Interpretation and Presentation. The former Director of the Ename Center for Public Archaeology and Heritage Presentation, Silberman has written or co-written nine books on archaeology, including David and Solomon: In Search of the Bible's Sacred Kings and the Roots of the Western Tradition (Free Press, 2006); The Bible Unearthed: Archaeology's New Vision of Ancient Israel and the Origins of Its Sacred Texts (Free Press, 2001); and Heavenly Powers: Unraveling the Secret History of the Kabbalah (Putnam, 1998).

Africa, Origins of Food Production in

Americas, Archaeology in the

Americas, First Settlement of the

Americas, Introduction of Diseases into the

FOREWORD FOR THE SECOND EDITION