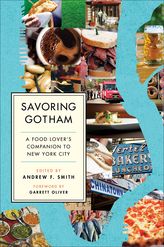 Savoring Gotham traces the rise of New York City's global culinary stardom in well-researched, yet accessible A-Z entries. From the Native Americans who arrived in the area 5,000 years before New York was New York, and who planted the maize, squash, and beans that European and other settlers to the New World embraced centuries later, to Greek diners in the city that are arguably not diners at all, this is the first A-Z reference work that takes a broad and historically-informed approach to NYC food and drink. Here readers will find entries on the foods and drinks and businesses that originated in the city, ethnic and regional culinary influences, the unique character of each borough (and several neighborhoods within the boroughs), important educational, cultural, and publishing institutions related to food in the city, biographies of key culinary leaders (both living and deceased), and selections from the city's food manufacturers, food importers, restaurants, and bars.

Savoring Gotham is for anyone interested in learning the history of this food mecca; not only the foodie history of upscale restaurants and celebrity chefs, but the bodegas, chop suey joints, automats, and Italian ice vendors that are a part of New York's culinary heritage. Written by nearly 180 of the most notable food experts – most of them New Yorkers – Savoring Gotham addresses the food, people, places, and institutions that have made New York cuisine so wildly diverse and immensely appealing.


Andrew F. Smith (Editor in Chief) teaches courses on culinary topics at the New School in New York. He serves as the series editor for the “Edible Series” at Reaktion Books in the United Kingdom, and is the author or editor of twenty-eight books, including Sugar: A Global History (Reaktion Books, 2015), The Oxford Encyclopedia on Food and Drink in America (OUP, second edition 2013), and New York City: A Food Biography (Rowman & Littlefield Publishers, 2013).