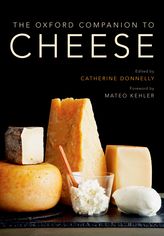 The Oxford Companion to Cheese

The Oxford Companion to Cheese is the first truly comprehensive reference work dedicated to the exploration of how four basic ingredients—milk, microorganisms, salt, and enzymes—are transformed into the more than fourteen hundred named cheese varieties enjoyed throughout the world. From cottage cheese to Camembert, from Gorgonzola to Gruyère, the Companion examines cheese on the farm, under the microscope, in the shop, and on the plate.

More than just a pizza topping or cracker spread, cheese has been the founding capital of a few European banking systems, a religious sacrament, and an inspiration for writers and artists as far back as Homer. The Companion reveals these hidden depths in more than 850 wide-ranging entries. Here you will read about rightly famous cheeses, but also some that are not well known outside of their area of production, such as the traditional Turkish and Iranian cheeses ripened in sheep's or goat's skin. You will learn about animal species whose milk is commonly used (cow, goat, and sheep) and not so commonly used (yak, camel, and reindeer) in cheesemaking, as well as a few highly important breeds within each species (the Nubian goat or Lacaune sheep). You will explore regional cheesemaking traditions that date back millennia, and both ancient and modern cheesemaking technology and equipment. And you will delve into the vibrant interior world of cheese: the blooms, veins, sticky surfaces, gooey interiors, crystals, and yes, for some, the strong olfactory notes, are all due to microbial action and growth.

To discuss cheese in its countless forms and contexts, the Companion enlisted 325 authors, including leading cheesemakers, mongers, dairy scientists, microbiologists, anthropologists, historians, journalists, archaeologists, and more, from backgrounds as diverse as cheese itself. This is the definitive guide to one of humankind's greatest discoveries.


Dr. Donnelly is a Professor of Nutrition and Food Science at the University of Vermont. She is the former co-Director of the Vermont Institute for Artisan Cheese, which was America's first and only comprehensive academic research center devoted to artisan cheese. She previously served as the Associate Director for the Northeast Center for Food Entrepreneurship, a research consortium between Cornell and the University of Vermont. Dr. Donnelly has been recognized by her colleagues for her many contributions to improving Listeria detection. Widely regarded as an international expert on this bacterial pathogen, Dr. Donnelly has published numerous articles and book chapters and delivered hundreds of presentations on the topic of Listeria. Her current scholarly interests include investigating the microbiological safety of raw milk cheeses aged for 60 days. Dr. Donnelly is the Editor of the book Cheese and Microbes, and she formerly served as the Scientific Editor of the Food Microbiology and Safety Section of the Journal of Food Science.