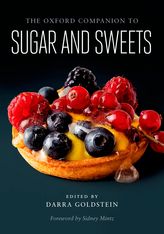 The Oxford Companion to Sugar and Sweets

This is the most ambitious and eclectic reference work of its kind, a sweeping collection of nearly 600 entries on all things sweet, written by 265 expert contributors. Its coverage begins with the human proclivity for sweetness, an attribute shared by nearly all mammals. From the simple image of a baby smiling when tasting sweet foods, the Companion continues across many thousands of years and around the globe many times, affording glimpses deep into the brain as well as stratospheric flights into the world of sugar-crafted fantasies. More than just a compendium of pastries, candies, ices, sweet preserves, and all manner of confections, this work explores the notion of the sweet as one that has brought richness to our language, our art, and of course, our gastronomy.

Readers expecting to find entries on the history of candy, the evolution of the dessert course, and the production of chocolate will not be disappointed. But the Companion also includes less-well-known material that may offer a sense of discovery and delight. Readers will learn about “sugar of lead” (lead acetate), prescribed for stomach troubles in the nineteenth century, and about castoreum (beaver extract), beloved by the modern food industry for the sweet taste it imparts. An entry on bird’s milk, an Eastern Europe candy, tells how its name reflects its physical scarcity during Soviet era shortages (obtaining a box of these candies was a coup nearly as unlikely as milking a bird). The Companion celebrates the allure of sweetness, but it also recognizes the darker aspects of our enthrallment with sugar, beginning with the inseparable links between sugar and slavery. The damage continues in the child labor used in harvesting cacao beans; in the sugar-heavy diet that undermines health in many communities; and in the stereotypes still associated with certain forms of sweets.

The Companion features a preface by the legendary anthropologist Sidney Mintz, whose Sweetness and Power: The Place of Sugar in Modern History was the first serious study of sugarcane in relation to economics and colonial power. It also has an extensive index and four appendices: on sweets in cinema, museums dedicated to sweets, the world's best pastry shops, and on songs that are in some way constructed around sweetness.


Dr. Darra Goldstein is the founder and former editor-in-chief of the James Beard Award-winning journal Gastronomica, the food editor of Russian Life magazine, and the series editor of California Studies in Food and Culture for the University of California Press. She is currently the Willcox B. and Harriet M. Adsit Professor of Russian at Williams College, where her courses include ‘Feasting and Fasting in Russian History’ and ‘Food and Society’. A prolific author, she has written or edited more than a dozen books, including four award-winning cookbooks.