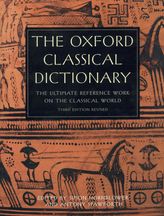 ‘a delight for anyone with any curiosity about the roots of our Western culture ... a browser's paradise, and I would think a researcher's quick rescuer’

For almost half a century, The Oxford Classical Dictionary has been regarded as the unrivalled one-volume reference work on all aspects of the Graeco-Roman world. It provides both scholars and non-specialists with a comprehensive source of reference which aims to answer all their questions about the classical world. Written by the very best of classical scholars from all over the world, the Dictionary provides coverage of Greek and Roman history, literature, myth, religion, linguistics, philosophy, law, science, art and archaeology, and topics in near eastern studies and late antiquity.

The approach is interdisciplinary: all areas, regions, and cultures are represented beyond the core areas of Greece and Rome. As well as providing factual information, the Dictionary contains many thematic entries on subjects relevant to the 21st century such as nationalism, race, and ecology. The text is written in an accessible style and all Latin and Greek words have been translated.

Antony Spawforth is Professor of Ancient History, University of Newcastle upon Tyne.

Index to initials of contributors

Abbreviations used in the present work