The Oxford Companion to Consciousness

More on this Topic

Source:
The Oxford Companion to Consciousness

There are many ways of attempting to capture the scientific essence of consciousness. One can record brain activity that correlates with states of awareness (see correlates of consciousness, scientific perspectivs; electroencephalography), study patients who have lost aspects of awareness (see blindsight), or manipulate awareness by using psychological techniques (see change blindness). One can also directly interfere with states of awareness by stimulating neurologically intact brains. This is achieved by transcranial magnetic stimulation (TMS).

TMS operates by placing an electrical coil on the scalp of an experimental subject. A brief electrical current is passed through this coil and induces a magnetic field which passes through the scalp of the subject. The magnetic field in its turn induces an electrical field in the region of the brain underneath the coil and this electrical change stimulates neurons (see Walsh and Pascual‐Leone 2003). The duration of a single magnetic pulse is less than 1 ms and it is therefore possible to interfere with brain processes at very fine levels of temporal resolution. Figure T4 shows a timeline of a sequence of events in a typical TMS application.

Because TMS can interfere with local brain processes with fine temporal resolution, it presents us with two powerful ways of making inferences about consciousness and other processes. It has been used most successfully in studies of visual awareness. Cowey and Walsh (2000) and Pascual‐Leone and Walsh (2001) used TMS to explore the cortical connectivity and timing of interactions between brain areas necessary for visual awareness. By applying TMS to a region of the brain containing many movement‐sensitive cells, Pascual‐Leone and Walsh caused subjects to experience visual movement. By applying a second pulse of magnetic stimulation over the primary visual cortex (*V1) they were able to degrade and, depending on the timing of stimulation, abolish the sensation of visual movement. The effect of stimulating primary visual cortex was greatest when it occurred between 15 and 45 ms after the stimulation of the movement sensitive neurons. Figure T5 shows the sequence of events in this experiment. This experiment showed that our awareness of activity in parts of the brain that are responsive to visual stimulation is dependent on back‐projections to V1. 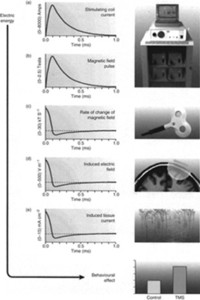 Fig. T4. Cycle of events in the application of a magnetic stimulation pulse. An electrical current is generated by the TMS stimulating unit and discharged into a circular or figure-of-eight shaped coil. Note the short rise time and duration of the pulse (a). The current generates a magnetic field pulse (b) which in turn induces a field in the brain and subsequent current changes in the underlying brain tissue (panels (c)—(e). 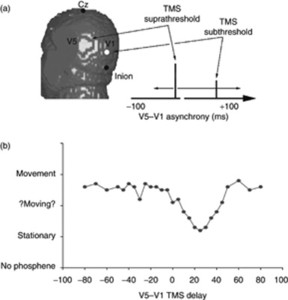 Fig. T5. An example of using the temporal resolution of magnetic stimulation, the differential effects of high and low intensity stimulation, and double coil stimulation to examine cortical connectivity. (a) Schematic of the experiment by Pascual‐Leone and Walsh (2001). TMS was delivered over MT/V5 to induce the perception of movement and either preceding or following this pulse a single pulse of sub-threshold TMS was applied over V1. (b) The results show that the perception of movement was degraded or abolished when V1 stimulation post-dated V5 stimulation by approximately 15—40 ms. (after Pascual‐Leone and Walsh 2001).

TMS can also be used to control the level of stimulation in brain areas. Silvanto et al. (2005) exploited this to explore whether the level of activity in V1 was important in determining whether activity in other regions of the visual cortex reached awareness. In this experiment a region of the visual cortex containing movement‐sensitive cells received TMS at a level of intensity sufficient to stimulate the neurons but not sufficient to induce an experience of visual movement. Within a few milliseconds of this stimulation TMS was also delivered over V1 at one of two levels of intensity: a level sufficient to induce a visual percept (a phosphene) or a lower level sufficient to stimulate the underlying neurons but not to induce a visual experience. Remarkably, when the level of V1 stimulation was high enough to induce a visual percept, the percept acquired characteristics of the neurons in the subliminally stimulated region of cortex containing visual movement‐sensitive neurons. These perceptual characteristics could only have been carried by back projections from movement‐sensitive neurons to V1. Thus TMS has established the necessity of V1 in visual awareness (Cowey and Walsh 2000, Pascual‐Leone and Walsh 2001) and the fact that the level of activity in V1 gates access to visual experience (Silvanto et al. 2005). These findings are taken to speak very strongly against the *microconsciousness view of visual awareness, which predicts that activity in the movement‐sensitive neurons would be sufficient for visual experience irrespective of V1 activity. They are more in line with the *re‐entrant view of awareness.

TMS can be used in a simpler way to directly test whether a brain region is necessary for awareness. Any theory which proposes that a particular brain region is a necessary part of the circuits supporting consciousness must meet what might be called the ‘lesion challenge’: i.e. if a region of the brain is said to be important, then interfering with the normal processes of that region should also interfere with awareness. This is a test that has so far not been passed by any other region of cortex as impressively as V1, but there interesting suggestions that stimulating the right parietal cortex may affect awareness (see Walsh and Pascual‐Leone 2003).

The phosphenes evoked by TMS in these and other studies are interesting in the context of consciousness and they have been evoked by electromagnetic stimulation for some time (see Fig. T6). When TMS is used to stimulate the regions of the brain responsible for hand movement, parts of the hand will twitch because TMS has introduced a disorganized pattern of firing into one of the motor areas of the brain. When TMS is applied to visual regions of the brain, the disorganized pattern of activity may be expressed as flash of light or a sensation of shimmering light. These light percepts are called phosphenes and their value lies in them as a means of activating the visual areas of the brain by bypassing the eye and pathways between the eye and the cortex. Cowey and Walsh (2000) used phosphenes to good effect to resolve a dispute about the patient G. Y. who has blindsight. There had been a long debate concerning whether G. Y.'s ability to accurately guess about the presence and even location of stimuli of which he was not aware was due to stray light in the retina. Cowey and Walsh were able to excite parts of G. Y.'s visual cortex without stimulating the eye and therefore avoiding stray light.

Phosphenes are intriguing in their own right. They tend to be colourless, but colours can be induced if subjects have adapted before TMS is applied. They tend to indistinct in form—‘blurry, jagged edges, uneven brightness’ are the kinds of comments subjects make, rather than reporting anything organized such as a face or an object. Much remains to be discovered about phosphenes and they promise to continue to provide an important method of parsing visual awareness. Figure T7 shows some examples of phosphenes drawn by subjects. 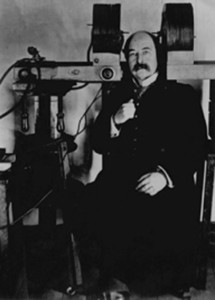 We are of course not only aware of external events but are also aware of ourselves and TMS has been used to test whether brain activity related to self‐awareness seen in *functional brain imaging (fMRI) studies is an essential for this experience. Keenan and colleagues (2001) applied repetitive pulses of TMS over the right prefrontal cortex and observed that subjects were less aware of their own faces than without stimulation. This is consistent with several other studies implicating the right prefrontal cortex in self‐recognition. Keenan's finding is also important because it is indicative of different brain networks for different aspects of consciousness. Even severe damage to the prefrontal cortex or repetitive TMS over the left and right prefrontal cortex simultaneously does not interfere with visual awareness (Cowey and Walsh 2000).

The advantages of TMS, then, are in its temporal accuracy and the potential to study the necessity of a brain region's contribution to awareness. Future advances may depend on the integration of TMS with other techniques and in particular with electroencephalography (EEG) and fMRI. If brain activations are postulated to be necessary for awareness it should be possible to stimulate these or other connected brain regions prior to recording brain activity with EEG or fMRI and determine whether the brain activity under examination is modulated by different levels of awareness.

Fig. T7. Some examples of phosphenes drawn by subjects when TMS was applied over a region of the brain containing movement-selective cells. The arrows indicate the direction of perceived movement.

Pascual‐Leone, A. and Walsh, V. (2001). Fast backprojections from the motion area to the primary visual area necessary for visual awareness. Science, 292.Find this resource: