The Oxford Companion to Consciousness

More on this Topic

Source:
The Oxford Companion to Consciousness

For some objects or events, perception can fluctuate over time, with alternative perceptual interpretations replacing one another even though the physical conditions of stimulation remain unchanged; this is known as multistable perception. These beguiling phenomena fascinate psychologists and philosophers because multistable perception reveals a patent dissociation of physical reality and mental experience. In recent years, brain scientists have been keenly interested in multistable perception: identification of the changing patterns of neural activity coincident with fluctuations between perceptual states could shed light on the neural *correlates of consciousness (Koch 2005).

Most instances of multistable perception arise in vision, and they can take a number of different forms. Some figures produce fluctuations in visual perception because they portray alternative, contradictory figure/ground interpretations—in Fig. M3a, for example, you can see black arrows against a white background or white arrows against a black background. Another classic example of figure/ground multistability is the vase/face illusion often pictured in textbooks. Other multistable figures portray ambiguous depth relations among constituent features, leading to spontaneous perspective reversals over time. Thus, for example, in Fig. M3b you may see the front surface of the outline cube facing in either of two directions, down and to the right or up and to the left. Still other figures connote alternative object interpretations—thus, for example, Fig. M3c can be seen as a duck or as a rabbit. Artists sometimes incorporate bistable figures into their paintings, a notable example being Savador Dali's The Slave Market with Disappearing Bust of Voltaire. The beguiling, ephemeral smile of Leonardo da Vinci's Mona Lisa also represents a form of perceptual ambiguity.

Perceptual multistability can also occur when viewing visual animations in which the directions of motion of the moving objects are ambiguous. Thus, for example, perception of motion experienced when viewing the animation sequence shown in Fig. M4 is bistable: the two objects can appear to move in either of two directions, and with repeated exposures to the sequence both possible visual interpretations will be experienced. There exists an auditory analog to bistable motion: when listening to an unchanging, rhythmic sequence comprised of two sounds (e.g. ‘tick’ and ‘tock’), an individual tends to hear one of the two as the ‘leading’ sound, but over time the particular sound heard as the ‘lead’ will fluctuate. In all of these instances, the perceptual ambiguity is resolved by a time‐sharing compromise: an observer experiences first one interpretation and then the other, with switches in perception typically occurring irregularly over time. Most examples of multistable perception entail two alternative interpretations, but in some instances three or more interpretations can be supported by the same physical stimulus (Suzuki and Grabowecky 2002). 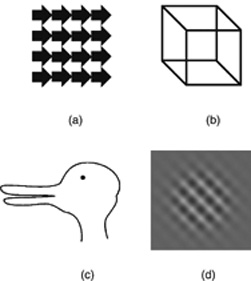 Fig. M3. Examples of bistable figures. (a) Figure/ground reversal, wherein one sees either an array of white objects (arrows) against a black background or an array of black objects (arrows) against a white background. (b) Example of the Necker cube, an implied three-dimensional object whose perspective is ambiguous (named after the 19th century Swiss crystallographer L. Necker who apparently first described the phenomenon). (c) An ambiguous figure that can be seen as a duck or as a rabbit (the original version was first commented on by American psychologist Joseph Jastrow in 1899). (d) Superimposed red and green diagonally oriented contours that, over time, wax and wane in visibility, a phenomenon sometimes called pattern rivalry or monocular rivalry.

In the examples just described, a given stimulus leads to one of several alternative perceptual interpretations: the stimulus itself remains present continuously within one's conscious awareness, with the perceptual interpretation of the stimulus fluctuating over time. Another striking category of multistable perception comprises the various forms of perceptual rivalry in which a stimulus itself disappears from conscious awareness (Kim and Blake 2005). Included in this category are *binocular rivalry, monocular rivalry (Fig. M3d), and *motion‐induced blindness. Unlike bistable figures, these various forms of rivalry are characterized by the complete perceptual disappearance of a visual figure for several seconds at a time. Rivalry is caused by conflict that is resolved by the intermittent dominance of one stimulus and the simultaneous suppression of another, competing stimulus. As with bistable figures, individual periods of dominance during perceptual rivalry are unpredictable in duration. Perceptual rivalry also exists in hearing, in the situation called dichotic stimulation wherein different auditory messages are presented separately to the two ears. A listener confronted with these conflicting messages tends to perceive just one and can, with effort, hold one of the messages dominant in perception indefinitely. 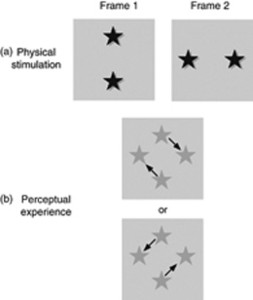 Fig. M4. Bistable visual motion. (a) When these two pictures are shown in rapid succession at the same location, one sees the two stars move from the top and bottom positions of the frame to the left and right positions in the frame. (b) The perceived directions of motion can switch upon repeated exposure to this simple animation, because the two alternatives are equally likely.

For almost all forms of perceptual multistability, *attention plays a modest but limited role in the resolution of the perceptual conflict. Thus actively attending to a given perceptual interpretation can prolong awareness of that interpretation, but attention cannot prevent the alternative from eventually achieving dominance. Some theorists believe these involuntary switches in perceptual state result from selective adaptation, or neural fatigue. According to this idea, the neural representation of the currently dominant perceptual interpretation wanes over time, eventually weakening to the point where the alternative neural representation is stronger and thereby achieves dominance (e.g. Wilson 2003). Other theorists construe alternations in perception as a by‐product of the *brain's propensity to plan and generate exploratory behaviour; according to this view, the mind is constantly monitoring the environment for new, alternative perceptual events (Leopold and Logothetis 1999). Still others think bistable perception is driven by an internal neural oscillator whose intrinsic frequency varies among individuals (Pettigrew 2001).

It is also possible to create visual figures in which the ‘correct’ perceptual interpretation emerges only after careful scrutiny, because the figure is concealed by its context or obscured by its highly schematized format. Once discovered, however, the concealed figure remains perceptually conspicuous and, moreover, it is immediately recognized when encountered subsequently. Figure M5a shows one well‐known example of irreversible perceptual bistability: when first experienced, this figure looks like a meaningless array of black and white splotches, but with effort and, perhaps, some subtle hints, one can organize the black and white splotches into a meaningful object or scene. Cognitive psychologist Craig Mooney created sets of these kinds of visually concealed figures (Fig. M5b), which he and others used to study *gestalt organization and its development in children.

An analogue to visually concealed figures exists in the case of hearing: a familiar tune whose notes are distributed randomly over three adjacent octaves is unrecognizable until listeners are *primed about the tune, after which they readily recognize it (Deutsch 1972; see musical experience, scientific perspective). Patterns of activity within the human brain presumably change significantly when a person recognizes what is portrayed in a previously unrecognizable, concealed figure (Murray et al. 2002). These dynamic patterns of neural activity distributed across the brain may form the neural substrate of conscious awareness.

Fig. M5. Concealed figures. (a) Reproduction of photograph by R. C. James. When viewing this for the first time, one sees an irregular scattering of black shapes on a white background, but with time the mind organizes the shapes into a meaningful scene (a Dalmatian dog sniffing the ground). (b) An upside‐down picture of a normally recognizable object that has been stylized to disclose only high-contrast borders.

Koch, C. (2005). The Quest for Consciousness: A Neurobiological Approach.Find this resource:

Wilson, H. R. (2003). ‘Computational evidence for a rivalry hierarchy in vision’. Proceedings of the National Academy of Sciences of the USA, 100.Find this resource: