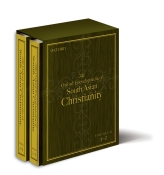 Ambitious, authoritative, and comprehensive, The Oxford Encyclopaedia of South Asian Christianity covers for the first time the 2000-year old story of Christianity in India and its neighbouring countries. Looking at Sri Lanka, Bangladesh, Pakistan, Nepal, Bhutan, and Maldives, alongside India, as well as Myanmar, Afghanistan, and the global South Asian diaspora, the Encyclopaedia celebrates the trans-cultural, migratory, and unique nature of South Asian Christianity. The rich heritage of the religion and its evolution over the last two millennia are clearly mapped: from people, institutions, concepts, churches, and denominations to events, historical developments, and contemporary themes. The diversity of India is reflected in the entries on regions, each of the states, and several important cities. The entry on each country opens a window to the history, particularly the Christian component, of that country from the beginning up to the present.

Alphabetically arranged, the cross-references and short bibliographies following most entries offer suggestions for further research. With a detailed Bibliography, this first-of-its-kind encyclopaedia will be a helpful reference for students and researchers of religion, history, and cultural studies, Christian laity, church leaders, and missionaries.

Bibliography on Christianity in South Asia