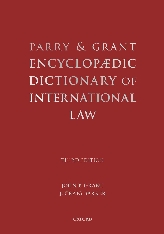 abuse of rights, doctrine of

Access to, or Anchorage in, the Port of Danzig, of Polish War Vessels Opinion