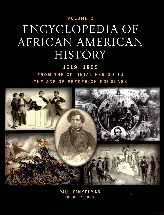 Encyclopedia of African American History, 1619–1895: From the Colonial Period to the Age of Frederick Douglass

The Encyclopedia covers an extraordinary range of subjects. Major topics such as “Abolitionism,” “Black Nationalism,” the “Dred Scott case,” “Reconstruction,” “Slave Rebellions and Insurrections,” the “Underground Railroad,” and “Voting Rights” are given the in-depth treatment one would expect. But the encyclopedia also contains hundreds of fascinating entries on less obvious subjects, such as the “Black Seafarers,” “Buffalo Soldiers,” the “Catholic Church and African Americans,” “New York African Free Schools,” the “Secret Six,” and much more. In addition, the Encyclopedia offers brief biographies of important African Americans—as well as white Americans who have played a significant role in African American history—from Crispus Attucks and John Brown to Olaudah Equiano, Frederick Douglass, Sarah Grimke, Nat Turner, Phillis Wheatley, and many others.

All of the Encyclopedia's entries are accessibly written and free of jargon and technical terms. Selective bibliographies and cross-references accompanying each article direct readers to related entries within the Encyclopedia and to primary sources and scholarly works beyond it. A chronology of major events and nearly 300 black and white illustrations enhance the work's usefulness.

African Americans and the West

American Board of Commissioners for Foreign Missions