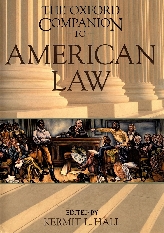 The Oxford Companion to American Law

The Oxford Companion to American Law takes as its starting point the insight that law is embedded in society, and that to understand American law one must necessarily ask questions about the relationship between it and the social order, now and in the past. The volume assumes that American law, in all its richness and complexity, cannot be understood in isolation, as simply the business of the Supreme Court, or as a list of common law doctrines. Hence, the volume takes seriously issues involving laws role in structuring decisions about governance, the significance of state and local law and legal institutions, and the place of American law in a comparative international perspective. Nearly 500 entries are included, written by over 300 expert contributors.

Intended for the working lawyer or judge, the high school student working on a term paper, or the general adult reader interested in the topic, the Companion is the authoritative reference work on the subject of American law.


Kermit L. Hall is President of Utah State University and Professor of History. He holds an undergraduate degree from the University of Akron, a Ph.D. from the University of Minnesota, and an MSL from the Yale Law School. President Hall has published widely in American constitutional and legal history, including The Politics of Justice: Federal Judicial Selection in the Second American Party System (1979) and The Magic Mirror: Law in American History (1989). He has edited or co-edited twelve other books, including The Oxford Guide to Supreme Court Decisions (1999), and served as the editor-in-chief of the award winning Oxford Companion to the Supreme Court of the United States (1992). President Hall has held fellowships from the National Endowment for the Humanities, the American Council of Learned Societies, the American Bar Foundation, and the Fulbright Education Foundation. The American Library Association bestowed the James Madison Award on him in 1999 for his service on the five-member John F. Kennedy Assassination Records Review Board, to which he was appointed by President Bill Clinton and confirmed by the Senate. He is currently a member of the Advisory Commission of the Standing Committee of Public Education of the American Bar Association.

David S. Clark is Maynard and Bertha Wilson Professor of Law at Willamette University. He earned his A.B., J.D., and J.S.M. degrees at Stanford University. Clark is a member of the California Bar and vice president of the American Society of Comparative Law. He has taught in Europe, Latin America, and Asia and held the Alexander von Humboldt and Max Planck Society research fellowships. Clark previously taught at the universities of Colorado, Houston, Louisiana State, and Tulsa. He was the Inns of Court Fellow at Inner Temple (London) (2000), the Fulbright Chair in Comparative Law at Trento University (1999), the Wing Tat Lee Visiting Professor of Comparative and International Law at Loyola University Chicago (1996), and the Dan Hopson Distinguished Visiting Professor of Law at Southern Illinois University (1987). He has authored or edited several books on comparative law, law and society, and procedural law and teaches in those areas.

James W. Ely, Jr. is Milton R. Underwood Professor of Law and Professor of History at Vanderbilt University. A graduate of Princeton University, he received his L.L.B. from Harvard Law School and his Ph.D. in history from the University of Virginia. Ely is the author of numerous books, including The Guardian of Every Other Right: A Constitutional History of Property Rights, The Chief Justiceship of Melville W. Fuller, 1888–1910, and Railroads and American Law. He is also an editor of The Oxford Companion to the Supreme Court of the United States.

Joel B. Grossman is Professor of Political Science at Johns Hopkins University. Previously he was Professor of Political Science and Law at the University of Wisconsin-Madison, where he taught for many years. His teaching and writing focuses on American constitutional law, constitutional theory, and legal institutions and processes. He has been Chair of the Wisconsin Judicial Commission, chair of the political science departments at both Hopkins and Wisconsin, and editor of Law & Society Review.

N. E. H. Hull is Distinguished Professor of Law and a member of the graduate faculty in history at Rutgers University, Camden. She has written Female Felons: Women and Serious Crime in Colonial Massachusetts (1987) and co-authored Impeachment in America, 1635–1805 (1984); Murdering Mothers: Infanticide in England and New England, 1558–1803 (1981); and Roe v. Wade: The Abortion Rights Controversy in American History (2001).

Adoption and Termination of Parental Rights

Aging and the Law