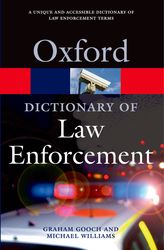 A Dictionary of Law Enforcement (1 ed.)

The only dictionary available that focuses on UK law enforcement terms, A Dictionary of Law Enforcement contains over 3,400 entries covering law, accountancy, insurance, shipping, commerce and trade, pathology, forensic medicine, criminology, and psychology. Adapted in part from entries in the market-leading A Dictionary of Law (edited by Jonathan Law and Elizabeth Martin), the dictionary has amended and expanded these entries to meet the needs of the law enforcement community. Succinct and practical in its approach, it targets the terms used on criminal, criminal justice, and police studies courses. Entries are supported by a wealth of practical information, including (where appropriate) citations and references to statutes and legislation, and are fully cross-referenced for easy use. The dictionary also contains five useful appendices: Abbreviations and Acronyms, Recordable Offences, Disclosure Code, Disclosure Guidelines and Disclosure Protocol.

Written by two former police officers, both now lecturers in law and criminal investigation, the dictionary fills a significant gap in the law market and will be invaluable to police officers and trainee officers, students and lecturers of criminology, criminal justice, and police studies, and other professionals needing clear definitions of law enforcement terms, as well as the general reader with an interest in criminal law.


Graham Gooch served in the police service for thirty years, mainly as a detective. The first twenty years of service were spent with the Metropolitan Police in divisions and the Specialist Operation Department. He was appointed detective superintendent in the Lancashire Constabulary and served there for ten years as a Senior Investigating Officer, with a tour as head of policy and criminal justice support. During that time he read law at the University of Central Lancashire and was awarded a first degree and a Master’s degree. On leaving the police service he took up a lecturing post at the university and, from its inception, taught on and now leads the degree course in policing and criminal investigation. Apart from teaching at undergraduate and postgraduate level, he reviews criminal law textbooks for a number of publishers and writes a weekly column on the Police Review to prepare candidates for the National Investigators Examination.

Michael Williams has been involved with the investigation and prosecution of serious crime since joining the Royal Hong Kong Police (as it then was) in 1977. He later held commissioned rank in the Royal Australian Air Force Police and in the British Army Intelligence Corps (TA) before qualifying as a legal practitioner. Michael is called as a Barrister in the Supreme Court of Queensland and the High Court of Australia and is admitted as a Solicitor, with higher court advocacy rights, in England and Wales. He is a former Senior Crown Prosecutor and Revenue and Customs Prosecutor in England and Wales, Legal Adviser to the Australian Federal Police, and Crown Counsel in Queensland, and is now an Advocate with the General Medical Council.

abuse of position of trust

acceptance of a bill