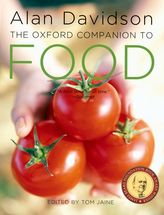 The Oxford Companion to Food (2 ed.)

The Oxford Companion to Food by Alan Davidson, first published in 1999, became, almost overnight, an immense success, winning prizes and accolades around the world. Its combination of serious food history, culinary expertise, and entertaining serendipity, with each page offering an infinity of perspectives, was recognized as unique.

The study of food and food history is a new discipline, but one that has developed exponentially in the last twenty years. There are now university departments, international societies, learned journals, and a wide-ranging literature exploring the meaning of food in the daily lives of people around the world, and seeking to introduce food and the process of nourishment into our understanding of almost every compartment of human life, whether politics, high culture, street life, agriculture, or life and death issues such as conflict and war.

The great quality of this Companion is the way it includes both an exhaustive catalogue of the foods that nourish humankind - whether they be fruit from tropical forests, mosses scraped from adamantine granite in Siberian wastes, or body parts such as eyeballs and testicles - and a richly allusive commentary on the culture of food, whether expressed in literature and cookery books, or as dishes peculiar to a country or community.

The new edition has not sought to dim the brilliance of Davidson's prose. Rather, it has updated to keep ahead of a fast-moving area, and has taken the opportunity to alert readers to new avenues in food studies.


Alan Davidson was a distinguished author and publisher, and one of the world’s best-known writers on fish and fish cookery. In 1975 he retired early from the diplomatic service – after serving in, among other places, Washington, Egypt, Tunisia, and Laos, where he was British Ambassador – to pursue a fruitful second career as a food historian and food writer extraordinaire. Among his popular books are Seafood of South-East Asia, North Atlantic Seafood, and Mediterranean Seafood. In 2003, shortly before his death, he was awarded the Erasmus Prize for his contribution to European Culture. Unsigned entries are by the author.

Tom Jaine is an independent writer and publisher, specialising in food and food history. He is the author of numerous books, including Cooking in the Country, Making Bread at Home, and Traditional Country House Cooking. He sometimes writes for The Guardian and other publications. He was editor of The Good Food Guide from 1989 to 1994, has presented ‘The Food Programme’ on Radio 4, and has participated in discussions of food on radio and television.