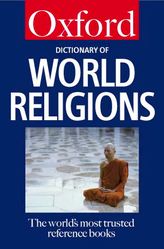 Abridged from the acclaimed Oxford Dictionary of World Religions, this Concise version is written by an expert team of 80 international and multi-faith contributors. It contains entries on all the major and many minor religions, including Christianity, Judaism, Buddhism, Hinduism, Islam, Jainism, Shinto, Sikhism, and Taoism. Over 500 entries cover movements, sects, and cults, from Cargo Cults and the New Age movement to Rastafarians and Soka Gakkai. Over 1,000 entries explore the sacred writings of religions worldwide, and short biographies of founders, leaders, gurus, philosophers, mystics, and heretics are given. There are details of sacred sites, customs, religious practices, dogmas, beliefs, traditions, festivals and fasts, and artefacts such as altars, rosaries, icons, and torah ornaments. There are also entries on worldwide religious teachings on abortion, animals, birth control, war, homosexuality, and suicide.