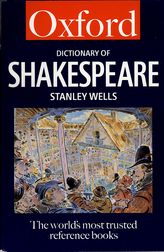 A Dictionary of Shakespeare (1 ed.)

Compiled by one of the best-known authorities on the Bard's works, this dictionary offers up-to-date information on all aspects of Shakespeare in his own time and on his impact and influence on later ages. It includes entries on the plays and the major characters, on Shakespeare's life and his contemporaries, on actors from Edmund Kean to Peter O'Toole, on theatres and directors, plus comments on Shakespeare by later authors such as Jane Austen, Dr Johnson, and Bernard Levin.


Stanley Wells is Director of the Shakespeare Institute, Stratford-upon-Avon and General Editor of the Oxford Shakespeare series.

advice to the Players, Hamlet's

Age of Kings, An

All is True (Henry VIII)