A cytoplasmic zinc finger protein (790 aa) that inhibits NFκB activity and TNF-mediated programmed cell death. The expression of the A20 mRNA is upregulated by TNFα. It is a dual function ... 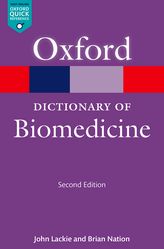 A Dictionary of Biomedicine (2 ed.)

...A20 A cytoplasmic zinc finger protein (790 aa) that inhibits NF κ ‎B activity and TNF-mediated programmed cell death. The expression of the A20 mRNA is upregulated by TNF α ‎. It is a dual function enzyme with deubiquitinating and ubiquitin ligase activity that triggers degradation of RIP ( receptor interacting protein kinase ) an essential mediator of the TNF receptor-1 signalling...

(SAI)A test of state anxiety that consists of 20 questions related to how the subject feels.

The effect of practising an ability on the learning and performance of a skill. For example, there is likely to be some positive transfer when a gymnast who has developed the abilities of balance, ...

An anthelmintic drug. Piperazines are a class of compounds with a core piperazine group; many have useful pharmacological properties.

A component of a given vector acting at right angles to a given radius of a given circle.

The maximum amount of oxygen that a person can extract from the atmosphere and then transport and use in tissues. Maximal oxygen uptake is estimated as the maximum volume of oxygen voluntarily ...

An early device consisting of a rotating drum covered with paper on which a tracking stylus records continuous measurements of blood pressure, heart rate, respiration, variations in the muscular ...

A long-term anaerobic test in which the subject runs maximally on a treadmill with a 20% gradient, at 8 miles per hour. The time to exhaustion in seconds is recorded.

(TAI)A measure of trait anxiety that consists of 20 items to which the subject responds using a Likert-type scale. TAI is often used as a companion test to SAI (see State Anxiety Inventory).

A factor that measures a specific property of a given substance and isconstant for that substance under specific conditions.

The angle formed between the longitudinal axis of the femur, representing the pull of the quadriceps muscle, and a line that represents the pull of the patellar tendon. A clinical measure of the ...

The first of the penicillin family of antibiotics, still extensively used to treat streptococcal, gonococcal, and meningococcal infections.

An antifungal and antiprotozoal drug (iodochlorhydroxyquinoline), used to treat infection with Entamoeba histolytica and topically to treat skin infections.

A group of different muscles that are functionally linked together so that they behave as a single unit.

Any social activity that has a negative effect on the maintenance and efficient functioning of a social system.

A condition in which blood is passed in the urine after running a long distance (see march haemoglobinuria).