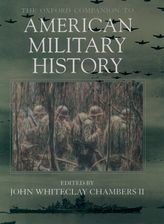 ...U.S. Military Intervention in, 1917–20 . American intervention in Russia developed in response to the political turmoil and great power competition triggered by the Russian Revolution and civil war. President Woodrow Wilson and his advisers enthusiastically welcomed the revolution of March 1917 , seeing the overthrow of the incompetent and allegedly pro‐German Czarist regime as a triumph of American political principles, an opening to displace German and British rivals for Russian markets, and an opportunity to revitalize Russia's military effort...

V. (of a ship) pitch: the ship plunged through the 20-foot seas.

A nuclear weapon that produces a yield of approximately 20 kilotons.

Weapons worn at a person's side such as pistols or other small firearms (or, formerly, swords or bayonets).

The department of the army that handled public relations and propaganda during World War II.

N. the process or act of attaining prescribed strength of units and levels of vehicles, equipment, stores, and supplies.

The branch of applied physics which deals with the actions and characteristics of missiles or projectiles in flight.

A camp from which expeditions or other activities set out or from which they can be carried out.

A word or phrase shouted by soldiers going into battle to express solidarity and to intimidate the enemy.

A pirate's ensign, typically thought to feature a white skull and crossbones on a black background; Jolly Roger.

A short jacket, usually zipping up the front, gathered with tight knit bands at the cuffs and waist.

The part of the flight path of a bomber that brings it into position to release its weapons.

A-20 an attack bomber—originally produced to the order of the French government and called DB-7–it was taken over by the British government after France fell to the Nazis and was ...

An officer in the U.S. Army, Air Force, or Marine Corps ranking above colonel and below major general.