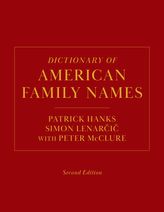 This revised and expanded second edition of Dictionary of American Family Names contains more than 80,000 of the most commonly occurring surnames in the United States, reflecting better than ever the unique diversity of the American population. All surnames with more than 300 bearers in the 2010 US Census are now included, increasing the number of names discussed by over 10,000 and widening the representation of languages and cultures from North and South America, Eastern Europe, Africa, the Middle East, and East Asia, many of which were absent from the first edition. Native American and African American surnames have been given particular attention, though much research still remains to be done in these important areas of American family history and naming practices. The product of a seventeen-year research project, gathering the contributions of over thirty linguistic consultants from all over the world, the dictionary explains the meanings-some intuitive, some amusing, and some quite surprising-of the family names for more than 90 percent of the US population, giving their comparative frequencies, linguistic and historical explanations, selected associated forenames, and occasional genealogical notes...

We have recently added three Reference Library titles to the Oxford Reference Premium subscription at no additional cost to subscribers:

The Oxford Companion to Spirits and Cocktails

The Oxford Dictionary of Family Names of Ireland