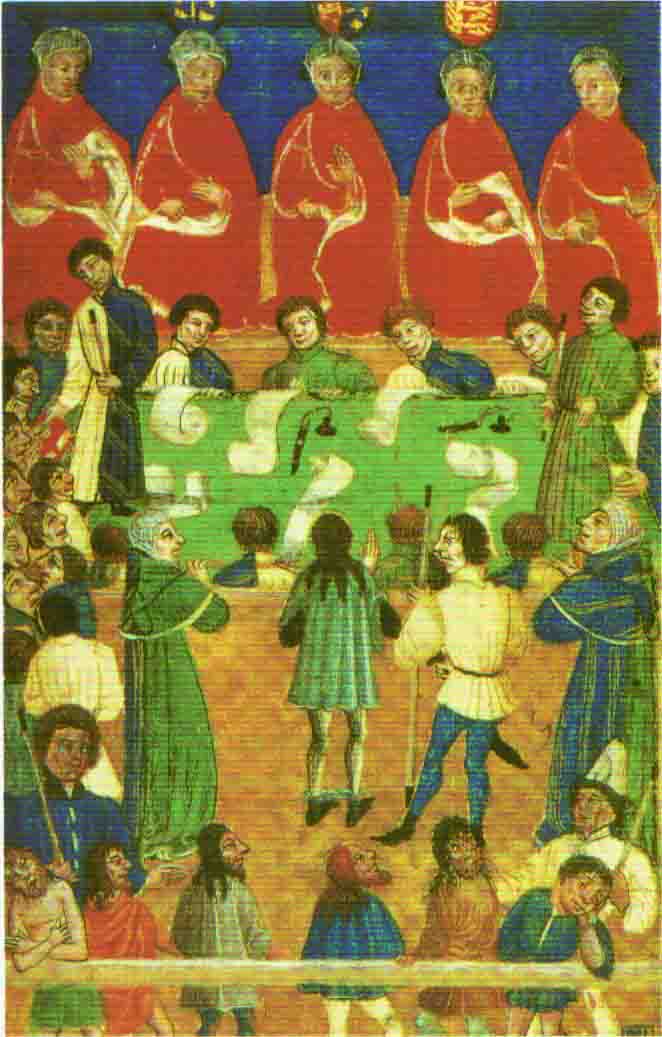 The Court of King’s Bench in 1450, presided over by Sir John Fortescue.

Words are Chameleons: The Languages of Law

‘Most of the disputes in the world arise from words.’

Words are to a lawyer what mathematics is to a physicist. That being the case, if an observer watched the goings on of, say, the Court of King’s Bench in the 15th century, they might wonder how the legal system could work at all, for they would be hearing words in three languages. The clients, or those in the dock, would be speaking English. Yet there the language of the land would cease, as the language of the royal court, French, took over and was responsible for terms such as accused, defendant, plaintiff, attorney, jail, plea. The lawyers would be conversing with each other and with the judge in what is called ‘Law French’, the language in which our earliest law reports (the Year Books) are written. Yet the terms these same men of law used on points of law would invariably be Latin. For the legal documentation moved from the Court of Chancery, which was presided over by the Lord Chancellor, who for many centuries was a clergyman. Before the Reformation clergymen spoke the language of the Church of Rome. Hence the language of the writs—issuing from Chancery—such as habeas corpus, trespass vi et armis (‘by force and arms’), assumpsit, and so on. The so-called maxims of equity, which also come from the Court of Chancery, are likewise phrased in Latin.

We, whether we like it or not, have inherited this confusion of language in the legal profession wherever the common law and equity are found. Why does this matter? It matters because these languages, principally Latin, have coined ‘terms of art’—that is, terms with a specific meaning for lawyers. For example, if I gave you an injunction to do something, in normal circumstances this would simply mean ‘an order’. Yet to a lawyer, it is an order from a court with legal authority. The word has a specific meaning with particular consequences. Unsurprisingly, the term has Latin roots.

Now all professions have these ‘terms of art’, be it in architecture, medicine, or dentistry etc. However, it is only in the legal profession, with its particular pedigree, that the terms used show this profusion of Latin and French. Lord Woolf made a bold attempt in the early 1990s to extirpate such terms. Yet British lawyers are a conservative breed. So these old terms hang on tenaciously and live with us still, even if slightly modified (a ‘mandamus’ is now a ‘mandatory order’) and, chancing upon the old term, you might still need to look it up. For example the current ‘claimant’ used to be a ‘plaintiff’.

Yet though ‘terms of art’ are important, they are not usually the words that cause the most trouble. Eighty per cent of appeal cases are over an interpretation of what statutory words and phrases mean. The same problem exists in the common law. Let me take an old example from the medieval Year Books. It seems that somebody had called a priest a ‘damned fool’. In the action for slander that followed a key point was this: did it, as an expression, injure the gentleman in his chosen profession? That is, was being a ‘damned fool’ compatible with being a competent priest? The court found that it was and the action was defeated. It concluded that it was perfectly possible to be a ‘damned fool’ and a priest at the same time and, as such, the reputation of a priest would not be tarnished. However, the court made clear, obiter dicta, that if such a remark had been made about a doctor or a lawyer, then it would have been a very different matter indeed. In such an instance it would have amounted to an actionable slander.

Note there the phrase obiter dicta. This is just the sort of term of art that the lawyer takes for granted and the layman stumbles over. Latin—of course—meaning something said ‘by the way’. In this case, that if the fact were otherwise (i.e. the person bringing the action had been a lawyer or a doctor), then the court would have found otherwise. Such pronouncements can be important because they may form a persuasive authority, which a later court can apply. More terms of art!

So how do the lawyer and the layperson find their way through the thickets of terms that they will encounter? Firstly, statutes contain their own little dictionaries. These are usually found at the end of each Part of a statute and are called ‘interpretation sections’. However, even the legislator with the greatest foresight cannot hope to define all words and phrases within the statute. For one of the key problems with words is their ambiguity. The state imposes a tax on ‘cattle’. Does that term include llamas? Do they qualify as ‘cattle’ or not? If the author of the interpretation section has thought of this problem, all well and good. If not, the decision will rest with a judge or judges. They will not make that decision capriciously but will have to follow the rules of statutory interpretation. These are common law rules that have been developed by the judges themselves over the centuries. When they have made their decision, it is captured first in the Law Report and subsequently in other legal works. As we have seen, judges play an equally important role in defining the meaning of words and phrases in those areas of law where the rules of common law largely prevail and statute plays a more minor role (tort, contract).

So can we contrive a system in which all words are defined and all nuances banished? It is but a pipe dream. For, as Justice Holmes observed: ‘A word is not a crystal, transparent and unchanged, it is the skin of a living thought and may vary greatly in colour and content according to the circumstances and the time in which it is used.’ Furthermore, it would be a grim day for lawyers if such a dream could be realized. One is reminded of the toast first given at Sergeants Inn in 1756 by Mr Wilbraham, and since then much repeated: ‘Gentleman, to the glorious uncertainty of the law.’ For it is that very uncertainty—uncertainty, usually, over the meaning of words— by which lawyers earn their keep.

Owain Blackwell, Jurist, Tutor, Lecturer. He taught both law and politics since 1988 at Universities in both the United States and the United Kingdom. He is a contributor to the OUP Dictionary of Law since 1994.