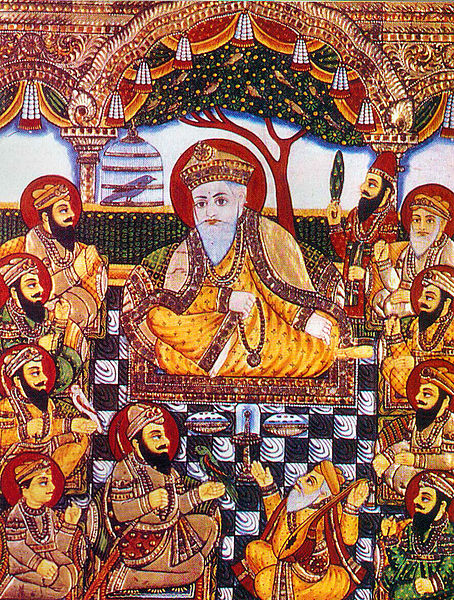 Sikh Gurus with Bhai Bala and Bhai Mardana on WikiCommons

The year 2019 marks the 550th birth anniversary of Gurū Nānak (1469-1539), the ‘founder’ of the Sikh tradition. Much of the material concerning his life comes from the Janam-sākhīs (“life-narratives”) that were first written down roughly four decades after his death but had begun circulating orally during his lifetime. From the available sources Gurū Nānak’s life may be divided into three distinct phases: an early contemplative period; a mystic enlightenment followed by years of pilgrimage and debate; and a conclusion in which he and his growing number of disciples established the first Sikh community (Panth). Employed as a steward by a local Muslim nobleman, the young Nānak worked diligently at his job in the town of Sultanpur Lodhi situated on the main road that connected Lahore with Delhi. His mind was mostly preoccupied with spiritual matters, and he spent long hours in meditation on the divine Name (nām simaran) and devotional singing (kīrtan). Early one morning, while he was bathing in the Vein River, he disappeared without a trace. Family members gave him up for dead, but three days later he stepped out of the water and proclaimed: ‘There is no Hindu, there is no Muslim.’ The significance of this statement becomes clear in the context of a religious culture divided between the conflicting truth claims of the Islamic and Hindu traditions. Nānak pointed the way towards the common humanity underlying the external divisions. After his three-day immersion in the waters—a metaphor of dissolution, transformation, and spiritual perfection—Nānak was ready to proclaim a new vision.

Gurū Nānak’s autobiographical hymn in the Ādi Granth marks the beginning of his spiritual reign to preach the message of the divine Name (nām) to his audience (GGS 150). For him, Akāl Purakh (“Eternal One,” God) was the ‘Sovereign of Sovereigns’ with whom he had established a direct and personal relationship and who gave him the authority to disseminate the divine Word (shabad). He was then 30 years of age, had been married to Sulakhaṇī for more than a decade, and was the father of two young sons, Srī Chand and Lakhmī Dās. Yet he left his family behind to set out on a series of journeys to both Hindu and Muslim places of pilgrimage in India and abroad: “I have seen places of pilgrimage (tīrath) on river banks in the nine regions of the earth, including shops, cities, and market squares” (GGS 156). During his travels he encountered the leaders of different religious persuasions and tested the veracity of his own ideals through dialogue with them. The authenticity and power of his spiritual message ultimately derived not from his relationship with the received forms of tradition but rather from his direct access to Divine Reality (Ikk Oaṅkār) through personal experience. Such direct access was the ultimate source of his message and provided him with a perspective on life by which he could fully understand, interpret, and adjudicate the various elements of existing traditions. He conceived of his work as divinely commissioned, and he required that his followers must obey the divine command (hukam) as an ethical duty.

At the end of his travels Gurū Nānak purchased a parcel of land on the right bank of the River Ravi in central Punjab, where he founded the village of Kartārpur (“Creator’s abode”) in 1519. There, he lived for the rest of his life as the ‘spiritual guide’ of a newly emerging religious community. He delivered his key message of Oneness in song and music. His attractive personality and teachings won him many disciples (Sikhs, “learners”), who received his message of truthful living through religious hymns of unique genius and notable beauty. They began to use these hymns in devotional singing (kīrtan) as part of congregational worship. The first Sikh families who gathered around Gurū Nānak at Kartārpur formed the nucleus of the Gurmukh Panth (‘The Path of the Gurū-oriented’), the community who followed his path to liberation from self-centeredness (haumai). He explicitly distinguished his path from the Brahminical, the ascetical, and the Islamic traditions of the day. He defined the ideal person as a Gurmukh who practiced the threefold discipline of ‘the divine Name, charity and purity’ (GGS 942), claiming that the ‘path of the Gurmukh is beyond worldly attachments’ (GGS 360). These three features, nām (relation with the Divine), dān (relation with the society) and ishnān (relation with the self) provided a balanced approach for the development of the individual and the society. They corresponded to the cognitive, the communal and the personal aspects of the evolving Sikh identity. Gurū Nānak placed explicit emphasis on the ideal of moderate living in the world in which spiritual development and social engagement go together.

For the Kartārpur community Gurū Nānak established certain key institutions: the saṅgat (“holy fellowship”) in which all felt that they belonged to one large spiritual fraternity; the dharamsālā, the original form of the Sikh place of worship (gurdwārā), and the laṅgar (“community kitchen”), the inter-dining convention that required people of all castes to sit in status-free lines (paṅgat) to share a common meal. This was the first practical expression of Gurū Nānak’s social revolution to reorganize society on egalitarian ideals. In this setting of the partaking of food in caste-conscious India, anyone could be sitting next to anyone else – female next to male, socially high next to socially low, and ritually pure next to ritually impure. Again, Gurū Nānak offered his vision of gender equality within the Sikh Panth and took practical steps to foster respect for womanhood. He brought home to the harsh critics of women the realization that the survival of the human race depends upon women whom they unjustifiably ostracized within the society (GGS 473). Finally, Guru Nanak created the institution of the Gurū as the central authority in community life. Before his death in 1539, he designated his disciple Laihṇā as his successor by renaming him Aṅgad (meaning my ‘own limb’) and transferring to him the divine wisdom enshrined in the pothī containing his compositions. Thus a lineage was established that would continue from the appointment of Gurū Aṅgad (1504–52) to the death of Gurū Gobind Siṅgh (1666–1708), the tenth and the last human Gurū of the Sikhs. Today, his more than twenty-five million followers around the world are celebrating Gurū Nānak’s legacy. The momentous decision of the governments of Pakistan and India in November 2018 to open the Kartārpur corridor across the river Ravi linking Dera Baba Nanak Sahib (in India) and gurdwara Darbār Sāhib in Kartārpur (in Pakistan) marks the beginning of a new era of cooperation and a symbolic movement in the shared cultural history of the Punjab. From a global perspective it underlines the prospects for the Kartārpur corridor to become a ‘bridge of peace’ in the year of Gurū Nānak’s 550-birth anniversary.

Pashaura Singh is Professor and Jasbir Singh Saini Endowed Chair of Sikh and Punjabi Studies at the University of California, Riverside. His research is in the field of Ādi Granth studies and is the author of four Oxford monographs as well as co-editor of The Oxford Handbook of Sikh Studies.

The title of his newly published work is: A Dictionary of Sikh Studies.