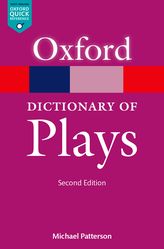 Although live theatre has sometimes flourished without plays, as in the commedia dell’ arte or in much contemporary post-modernist performance, the best and certainly the most long- lasting theatre has depended on a written text, the play. It is extraordinary that pieces like Oedipus the King, written almost two and a half millennia ago, or the four centuries old Hamlet remain so relevant. This is not only because they still have the power to move us deeply, but also since they provide cultural reference points. Freud turned to Sophocles’ play to label one of his major theories, and this article is headed with one of the many familiar quotations from Hamlet.

When I was asked by Oxford University Press to compile a dictionary of play texts, which was published in hardback as The Oxford Dictionary of Plays in 2005, in paperback as The Oxford Guide to Plays two years later, and is now available online on Oxford Reference, it was as though I had been invited to a splendid banquet. For four years I read or re-read over a thousand great works written for the stage and did my best to compress them into entries for the dictionary, giving a brief plot summary and a short explanation of the play’s importance for world theatre, and adding information like the date and place of first performance, its setting, cast composition, etc. From Aeschylus’ Persians to Alan Ayckbourn’s most recent play, by way of the Roman comedy of Plautus and Terence, Oriental classics, Medieval and Renaissance drama, the glory of the Elizabethan and Jacobean theatre, French neo-classicism, Restoration comedy, the exciting developments in Continental Europe, the emergent drama of the United States and in countries across the world, right up to present day writing for the stage I was able to gorge myself on an extraordinary variety of plots and characters. Better still, OUP offered me a delicious dessert by commissioning a fully revised second edition, which includes four dozen new plays, hopefully justifying Michael Billington’s description of the Dictionary as filling ‘a conspicuous gap in the theatrical market.’

A major challenge lay in the choice of plays to be entered. To continue the analogy, the banquet had more courses than I could possibly cope with, and I was forced to choose between the very different flavours of roast duck and peach melba. Even with the helpful guidance of Professors Peter Holland, J. Michael Walton, and Dr. Jean Chothia, I was only too well aware that some users of the Dictionary would be outraged that the one of their favourite plays or a playwright whose work they admired had been omitted. Their indignation would no doubt be intensified on discovering that some frankly mediocre plays had found their way on to the list. So one reviewer, who perhaps never got past the first page of the Dictionary, was very upset that Abie’s Irish Rose had an entry. And what about the profoundly tedious Gorboduc or Agatha Christie’s stale thrillerThe Mousetrap (incidentally another reference to Hamlet)? But can one ignore a hugely popular American play that spawned its own radio show, or the first tragedy written in blank verse, or again a play that has had an unbroken London run for over sixty years (I know because I saw it on my fourteenth birthday when the young Richard Attenborough was cast as the murderer). I simply attempted to ‘go with the flow’, to include plays likely to be of most interest to the anglophone theatregoer, reader, and scholar. This naturally raised questions about the relative significance of a play's importance for the development of a dramatic genre and its popularity in the theatre both in the past and today as well as its literary merit. While it is probable that a consensus might be arrived at for about two-thirds of the entries, the remaining choices remain much more contentious. I herewith apologize if my decision does not meet with your approval.

Another pleasing aspect of this Dictionary is that I was alone at the feast. Several Oxford works of reference are quite properly a collaborative venture. Experts in different fields are called upon to contribute to the work. I do not think that I am particularly megalomaniac, but it was very satisfying to work on this on my own, and I had only myself to bully about deadlines. For me it was in some way a summation of my life in academic theatre. I hope that for the reader there is at least a certain consistency in the style and approach of the entries.

As I read my way through the more than a thousand plays, I became aware that certain characters kept making an appearance, not only figures from the Bible or ancient Greek tragedy, but also historical individuals like Joan of Arc or Napoleon and fictional characters like Hamlet. So I thought it a good idea to include an Index of Characters which would not only allow the reader to find the play that a given character features in but also to trace an iconic figure through the history of drama. I hoped too that the Introductory Plays Selected for Entry, which is organized according to country and date, would prove useful as a kind of check list for anyone wishing to study a particular period of theatre.

If the Oxford Dictionary of Plays introduces the student to a hitherto unknown play, gives the scholar a quick source of information, assists the theatregoer to make a more informed decision about whether to see the performance of a certain play, or helps a theatre worker to find a piece for their next production, then I feel I shall have succeeded.