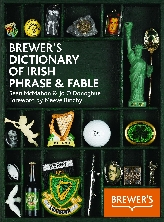 Brewer's Dictionary of Irish Phrase & Fable is dedicated to the history, culture, and mythology of the Emerald Isle. With a stunningly eclectic array of more than 6,000 entries on words, phrases, names, titles, people, events, and places, it is an invaluable work of reference. And in the great tradition of Brewer's, it is guaranteed to intrigue, inform, and delight lovers of the arcane, the esoteric, and the unexpected.

A work of nearly 900 pages in print, now available for the first time digitally, the uniquely wide-ranging and addictively browsable Brewer's Dictionary of Irish Phrase & Fable takes you on a fascinating journey around the island of Ireland. From Pearse to Paisley, the Floozie in the Jacuzzi to the Hags with the Bags, Kerrygold to Kerry jokes, and Beckett to Boyzone, it is a cabinet stuffed with Irish curiosities of every conceivable variety.

A vivid and affectionate celebration of the whole island of Ireland, this is the perfect book for anyone passionate about Ireland and its history.


Sean McMahon is a native of Derry, where he has lived for most of his life. He has more than 50 titles to his credit as author and editor, most of them in the fields of Irish history, literature, and biography. He is the author of A Short History of Ireland and short biographies of such Irish luminaries as Wolfe Tone, Daniel O'Connell, and Charles Stewart Parnell. His editorial credits include A Book of Irish Quotations, The Mercier Companion to Irish Literature (with Jo O'Donoghue), The Poolbeg Book of Children's Verse, and the highly praised Derry Anthology.

Jo O'Donoghue was born in County Kerry in 1956 and educated at University College Cork and Trinity College Dublin, where she was awarded an M.Litt in modern English. She has lived in Dublin since the mid-1980s and has worked in publishing and related areas since 1988. She is the author of a critical study of the novelist Brian Moore (1990) and has edited several anthologies including Golden Apples: Irish Poems for Children (1995) and Taisce Duan (1992) with Sean McMahon. She is also co-author (with Sean McMahon) of The Mercier Companion to Irish Literature.

Guide to the use of the Dictionary

Abbreviations used in the Dictionary