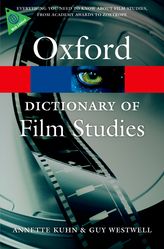 A Dictionary of Film Studies

Written by experts in the field, this dictionary covers all aspects of film studies, including terms, concepts, debates, and movements in film theory and criticism, national, international and transnational cinemas, film history, film movements and genres, film industry organizations and practices, and key technical terms and concepts in 500 detailed entries. Most entries also feature recommendations for further reading and a large number are web linked.

The dictionary is international in its approach, covering national cinemas, genres, and film movements from around the world such as the Nouvelle Vague, Latin American cinema, the Latsploitation film, Bollywood, Yiddish cinema, the spaghetti western, and World cinema. The most up‐to‐date dictionary of its kind available, this is a must‐have for all students of film studies and ancillary subjects, as well as an informative read for cinephiles and for anyone with an interest in films and film criticism.


Annette Kuhn FBA is Emeritus Professor in Film Studies at Queen Mary, University of London. She has taught university courses in Film Studies and Visual Culture both in the UK and overseas. She has authored, edited, and contributed to a wide range of works within the area of film studies, among them Censorship: A World Encyclopedia (2001), Screening World Cinema: a Screen Reader (with Catherine Grant; 2006) and Little Madnesses: Winnicott, Transitional Phenomena and Cultural Experience (2013), and is an editor of the OUP journal Screen for close to 40 years.

Guy Westwell is Senior Lecturer and Director of Taught Programmes in Film Studies at Queen Mary, University of London. He has taught at various higher education institutions across a wide range of courses on film history, film theory, and film industry and was the recipient of the Draper’s Award For Teaching Excellence in 2009. He is the author of War Cinema: Hollywood on the Front Line (2006) and Parallel Lines: 9/11 and American Film (2014).