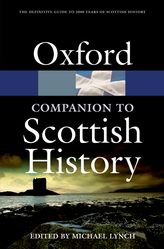 The Oxford Companion to Scottish History

Over 500,000 words in length, and written by more than 70 distinguished contributors, the Oxford Companion to Scottish History aims to cover more than 20 centuries of history, and interpret history broadly, covering areas such as archaeology, climate, culture, languages, immigration, migration, and emigration. Multi-authored entries analyse key themes such as national identity, women and society, living standards, and religious belief across the centuries in an authoritative yet approachable way. The A-Z entries are complemented by maps, genealogies, a glossary, a chronology, and an extensive guide to further reading.

More than a historical dictionary or encyclopedia, the Companion’s coverage extends from Orkney and Shetland to Galloway, from the Western Isles to the Borders, includes historical personalities such as Columba, Macbeth, and William Wallace, and stands alone - when compared to its competitors - in providing analysis of issues such as national identity and living standards and by offering readers a broader range of topics and approaches. An essential and authoritative reference source for students and academics of Scottish, British, Irish, and European history, and related fields, it will also appeal to interested general readers, including members of the Scottish Diaspora - in Canada, New Zealand, Australia, and the US.


Michael Lynch is a former Professor of Scottish History at the University of Edinburgh.