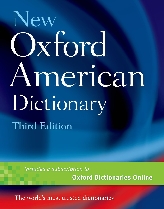 Edited by: Angus Stevenson  and Christine A. Lindberg