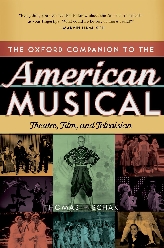 The Oxford Companion to the American Musical

‘Amazingly comprehensive and thoroughly researched, The Oxford Companion to the American Musical is a must for any theatre professional or theatre fan.’ Stephen Flaherty

With more than two thousand entries, this guide offers a wealth of information on musicals, performers, composers, lyricists, producers, choreographers, and much more. Biographical entries range from early stars Fred Astaire, Bing Crosby, Mary Martin, and Mae West to contemporary show-stoppers Nathan Lane, Savion Glover, and Kristin Chenoweth, while composers Irving Berlin, George Gershwin, Richard Rodgers, and Andrew Lloyd Webber all have articles, and the choreography of Bob Fosse, Tommy Tune, and Debbie Allen receives due examination. The plays and films covered range from modern hits like Mamma Mia! and Moulin Rouge! to timeless classics such as Yankee Doodle Dandy and Show Boat. Also, numerous musicals written specifically for television appear throughout, and many entries follow a work - Babes in Toyland for example - as it moves across genres, from stage, to film, to television. The Companion also includes cross references, a comprehensive listing of recommended recordings and further reading, a useful chronology of all the musicals described in the book, plus a complete index of Tony Award and Academy Award winners.


Thomas S. Hischak is Professor of Theatre at the State University of New York College at Cortland. He is the author of sixteen books on theatre, film, and popular music, including The Oxford Companion to American Theatre; the textbook Theatre As Human Action; and the award-winning American Musical Theatre Song Encyclopedia. He is also the author of twenty published plays.

Adventures of Marco Polo, The