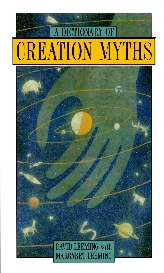 A Dictionary of Creation Myths

Covering thousands of years of intricate creation tales, A Dictionary of Creation Myths is the first and most comprehensive work devoted to creation myths from cultures throughout the world. With an easy-to-use A-Z format, this around-the-world tour provides quick access to information on the beliefs (both exotic and ordinary) of ancient civilizations from Sumeria and Babylonia to Egypt, Greece, and ancient Rome, from India and China to Japan and Indonesia, as well as the rich mythological history of Native Americans, the indigenous peoples of Australia, and many other cultures. We read of the creation myth of the Diegueno tribe of southern California in which the creator, Tu-chai-pai, made the earth female and the sky male and then formed mud into people; the Norse creation story of the gods Odin, Vili, and Ve, who made man and woman out of two fallen trees–Odin breathed life into the new pair, Vili's gift to them was intelligence, and Ve gave the gifts of sight and hearing; and the myth of Japanese creation in which Izanagei, and his sister Izanami, watch the first land form from ocean water dripping from Izanagi's spear. Alongside these ancient beliefs are the more modern, such as Darwin's theory of evolution and the big bang theory.

Each entry identifies the culture associated with the myth, and each myth is retold in clear, eloquent prose, with extensive cross-referencing to guide readers to other entries. Throughout, the authors share insightful analyses of the surprisingly intricate relationship of certain myths across cultures, regions, and time. A Dictionary of Creation Myths is essential for anyone who has ever wondered how the world was created, where we came from, or why we are here at all.


David Adams Leeming is Professor of English and Comparative Literature (Emeritus) at the University of Connecticut, Storrs. He is the author of many books, including The World of Myth.