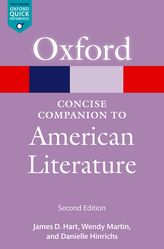 For nearly half a century, James D. Hart's Oxford Companion to American Literature has offered a matchless guided tour through American literary culture, both past and present, with brief biographies of important authors, descriptions of important literary movements, and a wealth of information on other aspects of American literary life and history from the Colonial period to the present day.

In this second edition of the Concise version, Wendy Martin and Danielle Hinrichs bring the work up to date to more fully reflect the diversity of the subject. Their priorities have been, foremost, to fully represent the impact of writers of color and women writers on the field of American literature and to increase the usefulness of the work to students of literary theory.

To this end, over 230 new entries have been added, including many that cover women authors; Native American, African American, Asian American, Latino/a, and other contemporary ethnic literatures; LGBT, trans, and queer studies; and recent literary movements and evolving areas of contemporary relevance such as eco-criticism, disability studies, whiteness studies, male/masculinity studies, and diaspora studies.


Wendy Martin is Professor of American Literature and American Studies at Claremont Graduate University, where she has been Chair of the English Department; Vice Provost and Founding Director of Transdisciplinary Studies; and Director of the Kingsley and Kate Tufts Poetry Awards. The author of numerous articles and books on American women writers and American literature and culture, Professor Martin founded and continues to edit Women’s Studies: An Interdisciplinary Journal. Her books include An American Triptych: The Lives and Work of Anne Bradstreet, Emily Dickinson and Adrienne Rich; We Are the Stories We Tell: Best Short Fiction by North American Women Writers since 1945; Colonial American Travel Narratives; The Art of the Short Story; The Cambridge Introduction to Emily Dickinson; and many others.

Danielle Hinrichs is Associate Professor of Academic Writing at Metropolitan State University in St. Paul, MN, where she has directed the general education writing program. She is Program Coordinator for Minnesota Writing and English (MnWE), a regional conference for faculty in writing and English. She has contributed to The Heath Anthology of American Literature and Oxford Bibliographies in American Literature and is co-editor, with Wendy Martin, of The Art of the Short Story: An Anthology.

James D. Hart was Professor of American Literature at the University of California, Berkeley, Director of the Bancroft Library, and author of The Popular Book and A Companion to California.