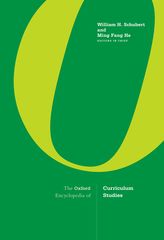 The Oxford Encyclopedia of Curriculum Studies


William H. Schubert is a Professor Emeritus of the University of Illinois at Chicago (UIC) where he was a faculty member for 36 years and where he coordinated the Ph.D. Program in Curriculum Studies, served as Chair of Curriculum & Instruction and Director of Graduate Studies. He grew up in rural northeastern Indiana, and earned an undergraduate degree from Manchester University, a Master’s Degree from Indiana University-Bloomington, and a Ph.D. from the University of Illinois at Urbana-Champaign, and has also studied at the University of Wisconsin-Madison, the University of Chicago, and Northwestern. At UIC he was awarded the position of University Scholar and received several university-wide awards for teaching and mentoring. Dr. Schubert is an elected Fellow of the International Academy of Education, an elected member of Professors of Curriculum, and recipient of the 2004 Lifetime Achievement Award in Curriculum Studies of the American Educational Research Association. He has published 19 books, over 250 articles and chapters, and presented papers or colloquia in over 300 scholarly venues. His Curriculum: Perspective, Paradigm, and Possibility (Schubert, 1986) was selected by Professors of Curriculum as the most influential curriculum text between 1970 and 1990, and both his Guide to Curriculum in Education (He, Schultz, & Schubert, 2015) and Reflections from the Heart of Educational Inquiry (Willis & Schubert, 1991) received Critics Choice Awards from the American Educational Studies Association (AESA). He has been president of the John Dewey Society, The Society for the Study of Curriculum History, and the Society of Professors of Education, as well as vice president of the American Educational Research Association. Schubert was the Consulting Editor for the Sage Encyclopedia of Curriculum Studies (Kridel, 2010) and editor of Part Three (Curriculum Theory) of the Sage Handbook of Curriculum and Instruction (Connelly, He, & Phillion, 2008). His work deals with curriculum history, theory, and development in school and non-school cultural contexts. He has authored bibliographical essays that are noted references in Curriculum Studies, for example: Curriculum Books: The First Eighty Years (Schubert & Lopez, 1980); Curriculum Books: The First Hundred Years (Schubert, Lopez Schubert, Thomas, & Carroll, 2002); Schubert, W. H. (2010), Journeys of expansion and synopsis: Tensions in books that shaped curriculum inquiry, 1968-present (Schubert, 2010) in Curriculum Inquiry 40(1), 17-94; and Sage Guide to Curriculum in Education (He, Schultz, & Schubert, 2015). Schubert is a former elementary school teacher 1967-1975, and he has consulted and lectured widely throughout the U.S. and world for over 40 years. The Zach S. Henderson Library at Georgia Southern University holds the William H. Schubert Curriculum Studies Collection of his papers, publications, and book collection. A longer biographical sketch and cv are available by googling that site.

Ming Fang He is Professor of Curriculum Studies at Georgia Southern University. She has been teaching at the graduate, pre-service, and in-service levels in the United States, Canada, Hong Kong, and China. She explores education, curriculum, and life in-between the Eastern and Western philosophy with a focus on Confucius, John Dewey, Tsunesaburo Makiguchi, Daisaku Ikeda, Weiming Tu, Martha Nussbaum, and Edward Saïd. She has written about cross-cultural narrative inquiry of language, culture, and identity in multicultural contexts, cross-cultural teacher education, curriculum studies, activist practitioner inquiry, social justice research, exile curriculum, narrative of curriculum in the U. S. South, and transnational and diasporic studies. Her books include: A River Forever Flowing: Cross-Cultural Lives and Identities in the Multicultural Landscape (2003); Narrative and Experience in Multicultural Education (with Michael Connelly & JoAnn Phillion, 2005); Handbook of Curriculum and Instruction (with Michael Connelly & JoAnn Phillion, 2008); Personal~Passionate~Participatory Inquiry into Social Justice in Education (with JoAnn Phillion, 2008); Handbook of Asian Education [with Yong Zhao (Editor), Jing Lei, Goufang Li, Kaori Okano, Nagwa Megahed, David Gamage, & Hema Ramanathan (Co-Editors), 2011]; Sage Guide to Curriculum in Education (with Brian Schultz & William Schubert, 2015); and Oxford Encyclopedia of Curriculum Studies (Editors-in-Chief with William Schubert; with Associate Editors: Isabel Nuñez, Patrick Roberts, Sabrina Ross, & Brian D. Schultz). She co-edits two book series with Information Age Publishing: Research for Social Justice: Personal~Passionate~Participatory Inquiry (with JoAnn Phillion) and Landscapes of Education (with William Schubert). She guest edited an issue of Critical Inquiry into Curriculum and Instruction on Experiential Approaches in Curriculum Studies: Personal, Passionate, and Participatory Inquiries (with JoAnn Phillion, 2001); a special issue of Journal of Curriculum Theorizing on Narrative of Curriculum in the U. S. South: Lives In-Between Contested Race, Gender, Class, and Power (with Sabrina Ross, 2013); and a special issue of The Sophist’s Bane: A Journal of the Society of Professors of Education on Minority Women Professors Venturing on the Landscapes of Education (with Sabrina Ross, 2015). She was an Editor of Curriculum Inquiry (2003-2005). She is Co-Editor-in-Chief of Educational Studies (2020-2025), a Leading Associate Editor of Multicultural Perspectives (since 2003), and a member of International Editorial Board of Curriculum Inquiry (since 2015). She is Program Director for Ed. D. in Curriculum Studies at Georgia Southern University (2019-2020). She was the Vice President of the AERA Division B (2014-2017). Her current research is expanded to the education of ethnic minorities and disenfranchised individuals, groups, tribes, and societies in the United States, Canada, Hong Kong, Mainland China, and other international contexts.

African and Black Diaspora as Curriculum

Alternative Conceptions of Adolescence as a Basis for Curriculum

An Overview of Qualitative Inquiry in Curriculum Studies

Art in the Postcolonial Imagination and as Tools of Conviviality

A Search for the Heart of Teacher Education Through Curriculum

Community Organizing as Curriculum and for Curriculum Critique and Reform

Critical Perspectives on Curriculum and Pedagogy

About the Oxford Research Encyclopedia of Education

Introduction: A Chronology of Curriculum Questions