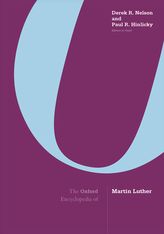 The Oxford Encyclopedia of Martin Luther

The Oxford Encyclopedia of Martin Luther is a collaboration of the leading scholars in the field of Reformation research and the thought, life, and legacy of influence – for good and for ill – of Martin Luther. In 2017 the world marks 500 years since the beginning of the public work of Luther, whose protest against corrupt practices and the way theology was taught captured Europe’s attention from 1517 onward.

• the contexts that shaped his social and intellectual world, such as previous theological and institutional developments

• the genres in which he worked, including some he essentially created

This indispensable work seeks both to answer perennial questions as well as to raise new ones. Intentionally forward-looking in approach, The Oxford Encyclopedia of Martin Luther provides a reliable survey to such issues as, for instance, how did Luther understand God? What did he mean by his notion of “vocation?” How did he make use of, but also transform, medieval thought patterns and traditions? How did Luther and the Reformation re-shape Europe and launch modernity? What were his thoughts about Islam and Judaism, and how did the history of the effects of those writings unfold?

Scholars from a variety of disciplines – economic history, systematic theology, gender and cultural studies, philosophy, and many more – propose an agenda for examining future research questions prompted by the harvest of decades of intense historical scrutiny and theological inquiry.


Derek R. Nelson is Professor of Religion and Stephen S. Bowen Professor of Liberal Arts at Wabash College. He is the co-author of Resilient Reformer: The Life and Thought of Martin Luther (Fortress, 2015) and author or editor of eight other books in the history of theology.

Paul R. Hinlicky is Tise Professor of Lutheran Studies at Roanoke College. He is the author of many books in systematic and historical theology, including Beloved Community: Critical Dogmatics after Christendom (Eerdmans, 2015).

Bible Translation and the German Language

Christological Sources in the Church Fathers

Confessional Age, Luther in the

Cross, The, and the Theologia Crucis

About the Oxford Research Encyclopedias